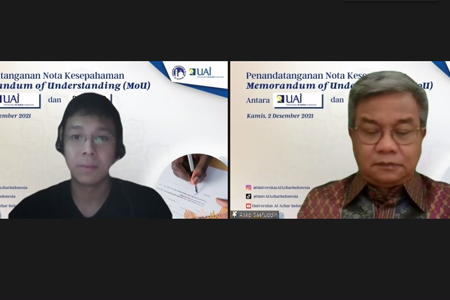 Enterprising university is one of the mantra that University Al-Azhar of Indonesia (UAI) hold close to its heart, wherein UAI promoted and a staunch supporter of entrepreneurship especially practiced by students. Thus, establishing relationship with Reactor School is a sound and consistent step taken by UAI. On November 12, 2021 UAI and Reactor School signed a Memorandum of Understanding (MoU) to tread untapped collaboration prospects between respective parties.

The MoU signing was opened with Al-Qur’an recital, followed with report of activites, then Rector of UAI Prof. Dr. Ir. Asep Saefuddin, M.Sc., cherished Reactor School collaboration with UAI and continued on, “this partnership will enabled entrepreneurship training in the future which in turn will increase the quality of UAI and its students entrepreneurship rate”. Furthermore, he reiterated ”We walk together together to help our students to become a great entrepreneur and hopefully they became, Bill Gates, Steve Jobs, Elon Musk and etc”.

Chief Executive Officer (CEO) of Reactor School, Khairul Rusydi replied in his speech “We are looking forward to working together with UAI in the future and increased entrepreneurship capabilities for both sides. We hope that in the future UAI students can study in Reactor School”. Then respective leaders signed the MoU and the MoU signing closed with a group picture.

The forging bonds between UAI and reactor school further signalled UAI devotion and commitment to become a leading enterprising university in Indonesia and to alleviate the nation and people burden.